Fine blanking, which was developed in Switzerland in the 1950s, added a slower but very precise stamping process that provides all cut surfaces with a smooth cut that meets the highest demands. The fine blanking process offers significant advantages over stamping. Compared to conventional stamping, fine blanking offers many benefits. It is more and more often chosen, as the smooth cut eliminates the need for reworking. Stamping is probably one of the oldest forms of metal processing. With the appropriate presses, thin and thick sheets can be stamped at high speed.

Precision stamping can also be used to process thick sheets of high quality, similar to fine stamping, but at higher speeds. Due to the development of presses, higher and more varied steel qualities as well as the considerably improved tool construction with ever better machine tools, stamping has developed from a rather rough type of sheet metal processing to an ever more precise process. stamping machines now perform unbelievably well.

Due to the development of presses, higher and more varied steel qualities as well as the considerably improved tool construction with ever better machine tools, stamping has developed from a rather rough type of sheet metal processing to an ever more precise process. stamping machines now perform unbelievably well.

If the sheets become thicker, not only the number of strokes and pieces are reduced, but presses with greater forces are also necessary. However, with increasing thickness of the material and higher pressing forces, another problem arises. If the punch exerts pressure in the material to separate it, the material naturally offers braking resistance. At the lower end of the material, this resistance is suddenly broken and the punch rushes through the remaining sheet thickness with a great acceleration. With this so-called cutting impact, the material unintentionally tears along more material at the edges and the lower edge virtually frays out. If the finished part is to later have exact, right-angled cut edges, it must be reworked. This post-processing can be dispensed with if the sheet metal parts are finely cut.

Here complex pillar racks are required for guidance. In the press, further processing steps such as countersinking, stamping, offsetting or penetration can be combined with fine blanking in progressive tools.

The impact of the cut is finally eliminated during fine blanking

The tool set is more complex for fine blanking and, compared to stamping, also consists of a counter stamp and a hold-down device, which press the sheet firmly before and during the cutting process. This induces a state of stress during the shearing process that is as close as possible to the compressive stress range. This increases the forming capacity of the material and the cut surfaces of the component do not show any cracks or fracture surfaces.

The workpiece material deforms plastically until the punch has passed completely through the sheet – there is no sudden tearing of the material. These tear-free cut surfaces can be used as functional surfaces without further finishing.

In fine blanking, the workpiece is pushed back into the mould via an ejector, before being ejected via the so-called counterholder force and finally blown out or removed. Since 1958, companies such as Feintool AG, founded by Fritz Bösch and now part of the Franke Group, and Heinrich Schmid AG, part of the Feintool Group, have been building fine blanking presses , that enable parts with sheet thicknesses between 0.5 and about 17 mm to be produced economically.

In particular, , the linear technology with servo control, which Schmid brought to series maturity in 2004, led to a significant increase in stroke rates. . Above all, however, the servo drive with the corresponding control system made it possible to finally eliminate the cutting impact.

Several factors are important for fine blanking or stamping

When deciding on stamping or fine blanking, the factors material type and thickness, number of pieces, application and the required quality of the cut surfaces determine whether the investment should be made in a stamping machine or a much more expensive and slower fine blanking press.

The disadvantages of fine blanking compared to stamping are clearly the considerably higher investment volume and the slower speed of a fine blanking press.

In 2003, the company Carl Wüst, which today belongs to the Wolpert Group, developed a production form between stamping and fine blanking with precision stamping. This means that even thick sheets can be processed with high quality similar to fine blanking. The advantage compared to conventional stamping processes lies in the possibility of specifically mixing precision stamping and conventional stamping in one workpiece.

Due to the servo-controlled hydraulic drive, the precisely controlled speed within each individual power stroke can be adapted to each process. A rapid traverse stroke shortens the cycle time, as does a shorter opening stroke when thin parts are to be cut.

The flexible speed setting for each step allows, for example, the cutting speed to be accelerated again after slow cutting even under full load. In order to achieve better material flow during embossing, the ram can be moved briefly at low speed.

The servo-controlled hydraulic drive, which is based on a hydromechanical position control circuit, enables higher stroke rates due to shorter valve switching times and faster movements. .The ram movement is hydraulically amplified by an AC servo motor via a control valve. The servomotor determines the setpoint. The hydraulic cylinder then executes these specifications exactly. With this technology, the presses achieve the variably adjustable and precisely controlled speed.

Certain areas specified by the customer are given a 100% smooth cut.

Other, less important areas, such as the outer contours of a workpiece, are punched conventionally and are therefore more cost-effective than fine blanking.

Through the intelligent design of the stamping tools, the feed, smooth cut and cut-out are specifically designed differently. In this way, a quality similar to that of fine blanking can be achieved at the desired points.

If serial parts with large delivery quantities are required, then fine blanking is usually lagging behind due to the speed. stamping flanges for the automotive industry, for example, are often produced in large quantities. Annual lots of up to 1,600,000 pieces or 12,000 pieces per day are not uncommon.

For example, a stamping flange for an exhaust system with a functional contour on the inside and a subordinate contour on the outside can be produced in the required quantity on a press. The flange is 20 mm thick. The inner contour is a functional contour and is produced as a smooth cut. The outer contour and the holes for the fastening screws are stamped conventionally. The stroke speed does not drop below 80 min-1 even for metal parts up to 20 mm. For the requirements described, precision stamping has established itself as the third stamping process in over one hundred years of stamping history. 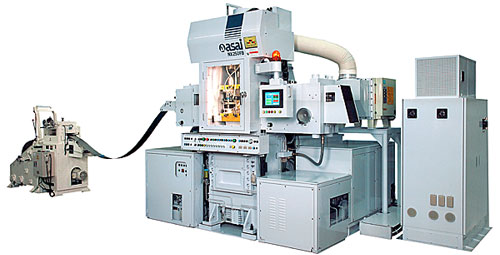