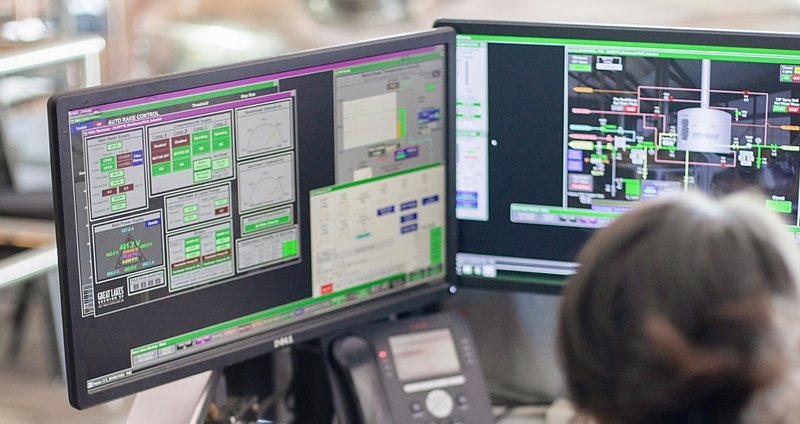 The Machine Edition version of FactoryTalk Studio is the most widely used variation of the software. It is used for programming standalone HMI terminals of the PanelView and PanelView Plus series. We will discuss the hardware a little further in this guide. The Machine Edition software will be deployed onto terminals. It interacts uniquely to PLCs on the floor and function without the need for any additional equipment.

FactoryTalk View Studio ME is typically deployed in smaller facilities or standalone equipment such as a case packer, palletizer, or otherwise. Original Equipment Manufacturers (OEMs) would usually develop an application that would control their machine without communicating to any system hardware external. The ME version of the software makes an excellent choice.

The Site Edition version of FTView Studio is used to deploy distributed applications that will typically control an entire site. However, within the Site Edition suite of HMI software, there are three distinct versions offered to the user. One may choose to create a standalone client that will run on a windows PC. The second option is to create a network. It distributed architecture that would pull the data from a server application and distribute it to clients across the manufacturing floor. Lastly, the third option involves a network layout that would contain several HMI screens that would be networked together to provide a better experience to the operators on the floor.

FactoryTalk View Site Edition is typically seen at more substantial sites that are capable of supporting highly available network infrastructure. This software package is capable of gathering data from multiple PLCs, lines, and machines. It has features of redundancy, automatically replaces failed servers, and will distribute HMI screens across the floor as configured by the design engineers.

Choosing Between FTView ME and SE for a New Project

The common question to deploy HMI solutions is related to FactoryTalk View ME versus SE. The bottom line is that ME has a low upfront investment, but costs more on a per terminal basis. On the flip side, SE has a high fixed upfront cost in server and licenses to deploy, but is significantly cheaper than the ME alternative. A rule of thumb is that if you’re looking to deploy less than 10 terminals it’s going to cost less on ME; otherwise SE is a cost effective solution. That being said, other factors may influence the selection process. For example, many of our customers would utilize the server for other functions once deployed. They would also shorten the repair time of the SE terminal and would be able to deploy additional HMIs much faster than they could otherwise.

The applications built for HMI terminals will require different hardware depending on their nature. From our experience, HMIs will be typically deployed onto one of the three types of equipment:

PanelView and PanelView Plus Terminals

The Allen Bradley standalone lines of HMI screens are the PanelView and PanelView Plus terminals. These HMI terminals are rugged, capable of running without interruption.They are pre-loaded with the software required to run FactoryTalk View Studio ME applications out of the box. As mentioned above, the standalone terminal is the fastest path to get an HMI terminal onto the manufacturing floor as it comes pre-configured with the right software. However, the downside of having this capability is the cost of the terminal. Generally speaking, a standalone terminal would cost significantly more than a distributed client.

The panels from Allen Bradley come in multiple variations. Depending on the need of the facility, engineers may choose a board with external buttons, monochrome versus RGB complexion, different widths and software packages. All allow a single or multiple PLC connections, and more.

Getting Started in HMI Programming and Development

As PLC Programmers gain experience in programming a controller, they naturally start to require an interface that would simulate certain items. In this section, we will discuss the typical learning path on how to get into HMI development as well as recommend a few entry-level terminals one should consider using with their PLC.

As discussed above, FactoryTalk View Studio Machine Edition is widely used across many plants in North America. This solution allows the user to create applications that would be deployed onto standalone PanelView and PanelView Plus terminals. Furthermore, FactoryTalk View Studio allows the user to simulate the entire application through the development software and experiment with the different configurations before uploading it to the terminal. Due to these reasons, it is the recommended path to learning HMI development.

ME Edition in details

In terms of actual practice, our recommendation is to install the software and to become familiar with the essential drawing tools first. These tools are similar to what you would see in visual design software such as Microsoft Paint. But they do create a different way of interfacing with the elements.

The second step would be to create basic input and output structures tied to a PLC-based process. A beginner project may be to create a simple Street Light System allowing the user to start the process and display the appropriate street light depending on the direction of the road.

Once you become comfortable with that, we recommend exploring intermediate functions of an HMI terminal. In a real application, the user should:

Advanced features of a standalone HMI terminal may include alarms reported by the system. A security system based on the permissions for the users, a series of elements that are hidden from an operator but are available to the maintenance team and so on. Lastly, the mastery of HMI programming would require you to build your design skills in addition to the technical ones. Professional HMI developers would create layouts that are pleasing to the eye and reflect the status of the system. For example, this could mean the difference between inserting a numeric value of the tank level and displaying the actual level through a filling scale.

HMI Terminals to Consider for Practice

As you get started in HMI programming, you’ll notice that there are many options outside of the traditional vendors. Nowadays, it is possible to run an HMI application on a Raspberry Pi and have nearly the same functionality as you would on another platform. However, in the industry, as discussed previously, you will see mostly PanelView terminals at the North American manufacturing sites. If you’re serious about building your skills in developing HMI solutions, you are recommended considering investing in one of such terminals.

In our experience, the PanelView Plus 1000 is an excellent entry-level terminal that has been discontinued by Allen Bradley. Yet it still is installed in numerous locations. It comes at a lower price than more of the new version of the PanelView, in spite of most of the features one which would need to practice.

What is the Difference Between HMI and SCADA?

SCADA stands for Supervisory Control and Data Acquisition. Although they are sometimes used interchangeably in casual conversations, there are components which would be more common to one than the other.
An HMI will typically be a stand-alone terminal that will communicate to one (most often) or several PLCs in the field. Such terminals may be distributed across the plant and often have no knowledge of each other.
A SCADA system will interface with a vast number of control systems. It will have a network access to the PLCs as well as HMIs across a plant. Based on the information collected, a SCADA system would process the information and deploy it to the appropriate terminals or HMIs. It is aware of all the HMIs in the field and will intelligently assign information to be displayed.

CTI SUPPLY built up a group of well-qualified senior engineering teams with a great number of in-house experts and automation programmers in Vietnam. We are available to take on different projects in scale, even on short notice, and quickly ramp up by working as an extension of your internal team. Our vast experience allows us to offer custom and application specific training as an added benefit to our clients.

With over years of experience in high-tech machine programming, CTI SUPPLY’s design team are able to simplify PLC/SCADA/HMI prototype process as our main package of your choice. We can also supply you with drawings and documentation for all your equipment builds.

During the current economic uncertainty, CTI SUPPLY is still open for business to offer our full offsite service globally.